Drones, and the Military-Industrial Complex


Drones are a weapon of war, presently being used by the U.S. Military using assertions not supported by facts. These weapons are manufactured and sold to the military by companies which own the technologies and thereby profit. The right or wrong of the war is ignored in their calculations, which focus on the profit to be made.

The membership organization which lobbies for the use of drones for the corporations which comprise its membership is the Association for Unmanned Vehicle Systems International. The growth of this industry is now measured in the billions of dollars, with applications for drone usage growing out into law enforcement within the United States on a weekly basis.

These are facts, supportable by contracts reflecting sales.

Facts are generally inconvenient for parties attempting to 'win' the battle for public opinion. These facts are true for drone contractors today and were true of the Military Industrial Complex on January 17, 1961 when Dwight D. Eisenhower gave his farewell address, and warning about the influence of these corporations, to the American People.

Eisenhower warns us of the military industrial complex

Manufacturing opinion in Americans results in increased sales and a limiting of the options they see as possible. This is at the heart of the strategy by which the Multi-National Corporations have build their business plan from the time of World War I – present day.
Propaganda had been used to influence groups and nations for as long as we have recorded history. But the practice was codified with a set of rules by Edward Bernays, a cousin of Sigmund Freud, in the 1020s. There are seven principles of propaganda, which include:

Seven Main Principles
Bandwagon – Follow the Crowd.
Card stacking – Tell them ONLY what you want them to know.
Glittering Generalities – Use words which let the listener fool themselves.
Name Calling - Negative, derogatory langauge to describe the enemy in speech, images, and writing.
Plain Folks – Taking on language, idioms, jokes, and accent to increase of the target audience to increase familiarity and elicit acceptance and trust.

Additional Principles
Assertion – Say it, and say it again with conviction
Lesser of Two Evils – Limit the choices to this or that, ignoring all other possibilities.
Pinpointing the Enemy – Name an individual, group, or nation as the 'problem.' Ignore refuting facts.
Simplification (Stereotyping) – Similar to Pinpointing. Ignore refuting facts.

The opinions held by Americans are largely the product of propaganda today, though this is now changing through access to the Internet.

Public Relations professionals know the public forgets about scandals, both corporate and politically, in only a few months or years. Today, major scandals of the early 90s have vanished from the collective memory.

Controlling the Main Stream Media, which is owned entirely my major corporations, ensured this would remain true. America originally saw independent journalism as an essential protection for the rights of the people. Newspapers were mostly owned locally, reflecting a diversity of voices.

Local 'government,' which was understood to be a service center used by the People, who together were and are the real government under American theory and law, was used to carry out those functions deemed of mutual benefit by the People.

Until the rise of the Internet, Americans had, in large part, lost connection with their own history and the foundations for American government. A reading of the Declaration of Independence, the Constitution, the Bill of Rights, and survey of the Federalist and Anti-Federalist Papers shows this to be the case.

The rising power of corporations, asserting itself through government, began to change this in the late 1800s. World War I and World War II enormously enriched the same corporations and banks named by Eisenhower in his speech. A significant number of these were simultaneously in business with Nazi Germany before and during World War II and also Russia. In his book, “Creature from Jekyll Island,” G. Edward Griffin provides documentation for this.

Major General Smedley Butler was the most respected and decorated military figure in America in the first half of the 20th Century. Having spent his life serving his country as a Marine in wars dictated by the economic wishes of corporations for decades he realized he and the troops he commanded had been used by those corporations. In response, he wrote, “War is a Racket.”

The General conveniently, and very suddenly, died in 1940 before our entry into World War II. War was building immense wealth within a small number of corporations, who were determined this flow of power and money continue.

The Second World War was opposed by Conservative Republican congressional leader Robert A. Taft, “who articulated a non-interventionist foreign-policy vision sharply at odds with the internationalism of Truman and Eisenhower. Although derided as ostrich-like, Taft was prescient on several points, such as the structural weakness of the United Nations and the propping up of repressive regimes that would result from U.S. interventionism.”

After World War II Conservatism was targeted by the Rockefeller Republicans, who today we know as NeoConservatives. To accomplish this they used an array of tools which included the C. I. A., an agency which recruited from a social elite who had strong connections to the corporate world.

Today, the assassination of John Fitzgerald Kennedy on November 22, 1963, is credited to a cooperative effort between the C.I.A., and corporations in such first hand and authoritative books as “Mary's Mosaic,” by Peter Janney. Janney is the son of Wistar Janney, a high level operative in the C. I. A. from close to the time of it's inception after World War II through the 1960s.

After the fall of the Berlin Wall the world appeared to be heading for a long-awaited peace. But this was not in alignment with the business plans of the Military Industrial Complex.

The public relations people for the corporations had used boogymen to persuade Americans to the necessity of war and vast expenditures in military spending from World War I until the Wall came down. For this purpose they had first vilified the 'Hun,' and then 'Communism.'

They chose a new boogyman in the last years of the Reagan Administration.

“The Power of Nightmares,” produced by the BBC, digs into the history of the C.I.A., and its manipulation of Islam and placement of operatives to stymy their move toward liberalization, which threatened the oil companies. The issue of a threat from a radical Islam must be considered outside the narrowing confines of propaganda, the corporate tool used to herd Americans, keeping us within the limits which powers their profits. This is especially true for the strategies of Pinpointing the Enemy, and Stereotyping.

VIDEOS
Part I: Baby It's Cold Outside
Part II: The Phantom Victory
Part III: The Shadows in the Cave

If you identify the location of the major world sources of oil you will notice much of the world reserves are located in land controls by Islamic people. Until this became known Islam was never presented as a threat. Once this took place, this changed. 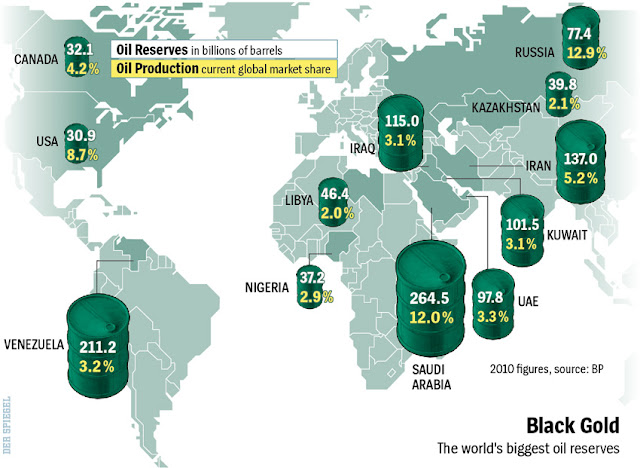 Multiple operations in these countries by the CIA and its corporate partners caused shifts in attitudes within the people living in these countries. Ron Paul, using the term coined by the CIA, called it “Blow-Back.” John Perkins, in his book, “Confessions of an Economic Hit-Man,” explains the means used to defraud smaller nations of their natural resources, oil chief among these.

People resent being manipulated, bombed, and defrauded. Where we did not have enemies, they were created.

VIDEO - Confessions of an Economic Hit Man: How the U.S. Uses Globalization to Cheat Poor Countries Out of Trillions

For a century corporations have used the military and government of our country to make war on people around the world. They have done this for profit and without showing a shred of conscience.

Today, the world is fed up. If the roles were reversed, we would have taken action long since.
These same interests understand well Americans are waking from their long sleep. This why drone technologies are now being deployed within the United States.

Visit:  Drone Free Zone
Posted by Melinda Pillsbury-Foster at 8:22 PM No comments: Links to this post