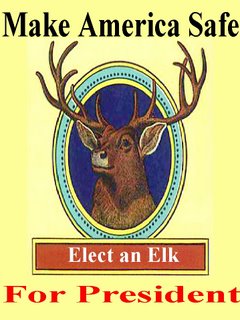 America is off course - Time for a change.
Protect the rights of Americans - Elect another kind of animal for President

At the close of the First World War the Elks wrote a check for $1,000.000.00 so that America's Veterans could have a hospital for the first time. That is how it happened. Hardly anyone knows that today.
Beware of government, it takes credit for what it did not do - and it blames us when it fails.

Elections were on all of our minds when I went to Elks that Tuesday, but the questions that became the central focus of our discussion. lead us in unusual directions.

It was only in the 1960s that corporations succeeded in assuming personhood. Since then the irresponsible and grasping subset of corporations have been working at supplanting government. They are succeeding. The dynamic thereby produced is both complex and simple. The means used to control and steal are many, the formula remains the same. Lie. Distract. Take. Do it again.
Having formulated a powerful set of tools, the ‘right to privacy,’ the means for broadcasting disinformation, and then the means for displacing the original vision of American government through a collation of corporate entities, the pieces were in place for turning the representative republic originally visioned by the founders into a federal empire.
Thomas Jefferson said that we should have another revolution every twenty years, that being the maximum time that a government could remain free of corruption.
“That whenever any Form of Government becomes destructive of these ends, it is the Right of the People to alter or to abolish it, and to institute new Government, laying its foundation on such principles and organizing its powers in such form, as to them shall seem most likely to effect their Safety and Happiness.”
Americans should listen to the words of their founders and consider carefully what actions seem best.
Corporations have come to exercise rights superior to those of individuals. Each of these is a conversion of an existing institution of American life; paid for by the people, but used by those who are building the federal empire we now see taking shape. It could not have happened without generations who ignored the essential issues of freedom.
Using the military, Social Security, the department of Social Services, education, disasters, the court system and the wistful hopes of a Nation those in change continue to steal. For most of them it is the only job they have ever held. While this is going on the series of mistakes made by wishful civil libertarians, hoping that band-aids will fix the problems, continue to accumulate.
It is time for real answers and we can only hope it is not too late.
Elect an elk as president. They are quick of eye, keen of perception, swift of foot - and tasty when roasted over a slow fire; a much better deal than the bunch in office today.
Posted by Melinda Pillsbury-Foster at 11:32 AM