How the NeoCons make War on all of us 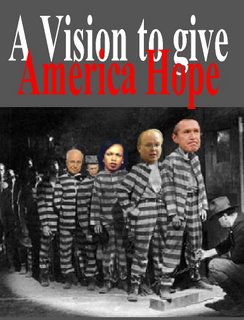 Get this graphic on a tee-shirt or mug.


Melanie Morgan, recovered gambling addict and San Francisco talk show host, announced two days ago that her new project, Censure Carter, will be launching a series of TV ads urging that Congress take up the issue of censuring Jimmy Carter for sympathizing with the Palestinians.
Morgan is in this way fulfilling her obligations as one in the string of political tools activated by John Fund to carry out the strategic disinformation campaigns for his NeoCon employers.

Morgan's lackluster career took off when she was recruited by Fund several years ago and since then she has found a new faith, NeoConism. A frequently hosted speaker at events put on by such front groups as Political Vanguard, Morgan is just another in a series of individuals to hook her hopes not to the truth but to doing the nasty work of this White House.

Under fire from all sides this White House desperately needs to create the appearance that Republicans are united behind George Bush. On the front page of Political Vanguard you learn to your amazement that George Bush has an approval rating of 40.5%. Doubtless these figures came directly from Karl Rove and reflect his immediate family members.

Faux websites, phoney organizations, constructed and populated, are a long time political weapon used in many ways by the NeoCons. During the last part of the 2004 Presidential Campaign a website, purporting to represent swift boat vets was launched to create the appearance that Kerry lacked support from other veterans. And this was most likely so, but the vehemence of the attacks from SwiftBoatVets.com can be traced to the NeoCons.

Sen. Zell Miller presented an award to the group at a banquet sponsored by the American Conservative Union. On their blog page two hard line NeoCon co-travelers are the first two authorities cited on “ the implications of John McCain’s preference for “clean government” over the First Amendment.” Those are George Will and Ed Crane of Cato.

Naturally, the event was covered favorably by Fox News. Miller is quoted there as saying, "The swift boat veterans performed an invaluable service to America," Miller said in a statement. "These veterans took a lot of undeserved criticism for daring to speak the truth." One wonders what they risked given the toothlessness of the liberal establishment.

Much of this is already known, though in the way of the flow of events, mostly forgotten. A quick read of the excellent article by Joe Conason, appearing on Salon.com shortly after the events, helps us see the connections that activated this particular attack.

Not that Kerry did not deserve to have his military service questioned; his brief hiatus in the combat zone cast no credit on him. He used it as a political tool himself, while still in the service and when he grabbed the Democratic nomination. Myself, lacking a candidate I could vote for chose to vote for someone who, if she was ever a politician is now a good one, namely Susan B. Anthony. Do not forget that still after over two centuries such as John Kerry still have failed to simply affirm in Constitutional law the inherent rights of women.

As I write another such attack in going on, still unnoticed except by those stalwart veterans who are feeling the impact, on the Veteran's Party. Philip Meskin, a Vietnam Vet has worked assiduously to start a party that would stand up for American's Veterans for years. In 2003 he succeeded. The bogus Veteran's Party has even claimed to be the original; impossible given their own charges. But doubtless Rove told them the big lie works.

Now, doubtless because that party threatens to bring attention to the plight of Veterans who return from service to slow deaths of neglect, suffering from diseases caused by their service, that voice must be stifled. Neither major party is to be trusted. The means in this case is a website that copies the information obtained on the Meskin site and launches claims of wrongdoing that are clearly bogus; these are debunked with letters from the agencies receiving the complaints.

These bogus sites usually look far more professional than do those that are genuine. The Morgan site is an exception; it went up after this correlation was noticed.

When asked what effect this had on his work to help veterans Meskin said, “This is destroying our ability to save veterans in every imaginable way.” Meskin has himself spent countless hours in this work both before and after he started the Veteran's party.

But the point here is the use of bogus organizations as political weapons to skew opinion at critical junctures as events unfold and also to understand the cadre of individual employed in that ugly work.

John Fund, Melanie Morgan and those named in the Conason article are only a few of the cadre of operatives whose livelihoods depend on destroying organizations and individuals trying to achieve positive change unfriendly to the NeoCon goals or who represent threats to NeoCons power.

You can expect that now that they are under fire for the first tile the NeoCons will be launching more similar attacks. Be warned.

The American people need to understand. They need to 'get' how the Constitution was meant to work and how the conversion that predates the NeoCons was orchestrated and by whom.
One step on that path is to understand what George Bush has actually done. His activities are not just politically destructive they have been criminal. What is needed is not impeachment but prosecution for criminal offenses.

Therefore the people will put George W. Bush on Trial in the Court of Conscience.

There are many reasons that those in positions of trust failed to act. They are, as are all of us, all too willing to overlook what is inconvenient. It is a fact of human nature that we can usually see and accept corruption when we see it elsewhere. But when we confront evidence that our own lives and jobs and egos are on the line the blinders go up.

When the corruption reached the highest level and those paid and trusted to do the right thing saw the end of their own perks on the horizon they were frozen in the headlights, vainly looking for any other way out. That is where they are now. The only exit is truth and that they cannot face.

This time,we the people, have to do it ourselves. The vision of America that is true, the one that whispers to us still that we are all equal and none are above the law, for that vision we must be prepared to act.

Get off the Grids, Organize locally, Build Coalition, Try George W. Bush for Racketeering.
May God bless the journey that leads us to freedom.

The Justice Coalition, a long existing organization with a record for taking corrupt judges off the bench, has activated to provide for Americans a demonstration of how the justice system should work. Bush is the first example. To contact them e-mail: the.melinda@yahoo.com

Hear Melinda at BBSRadio.com, Fridays, at 4pm PT on The Spiritual Politician. Bringing government, a human tool, into alignment with our spiritual natures.
Posted by Melinda Pillsbury-Foster at 3:50 PM