Republicans must speak out for Impeachment: Ron Paul for President 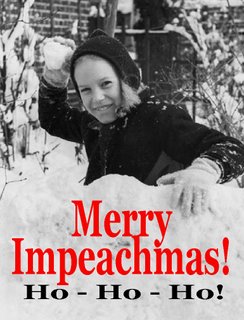 Buy Christmas Cards and gifts at our cafepress site!

The murmurs began in the halls of Congress even before legislators and their staffs packed up and left, marking the end of this Congress and the beginning of the holiday season. Those offices will be quiet for the moment; politicians considering how they can benefit from coming out on impeachment or confronting their now receding fears have time to caucus their home districts. The murmurs come in many different cadences and tones. They are marked with anger and elation, ambition and calculation.

Democrats are beginning to listen to the tenor of the country, slowly letting themselves realize just how many Americans view this administration, perhaps more than they did themselves, as a criminal enterprise. Impeachment is becoming a word that speaks not of sleaze and cigars but the promise of a new beginning and, perhaps more important to many of them, political positioning that could take a career all the way to the White House.

Real Republicans, those who watched the NeoCon Nazis smash every tenet on which the Republican Party was founded, also have time to think. Those invested in career quests for power will consider first how they are now viewed. Those Republicans who believe in the principles that made them Republicans must confront another issue. Their party was hijacked, its moral capital used to accrue profits for Bush and his corporate sponsors. In so doing, all Americans lost, some, their lives, others our wealth, and all of as us a sense of trust. Rhetoric replaced truth as the principles long associated with being a Republican were smashed beyond recognition. Small government, individual rights, Constitutional integrity, low taxes, local control, the principles of the Republican Party that those of us who believed the message of Barry Goldwater, stand in stark contrast to how this administration eviscerated the rights and honor with which it was entrusted.

Torture, deceit, spying on Americans, lies told to profit megacorporations and oil interests; before this Congress decamped, they took time to vote in ten billion in incentives for oil companies; nothing for veterans. There was seemingly no limit to what Bush and company would do to line their pockets and live out their fantasies. Sometimes doing the right thing forces us to confront our own souls. It should never have happened. It did. Now America needs justice so that healing can begin. You can bank of the fact that the NeoCons rely on spinning this as a partisan battle. That, Republicans must not allow.

America needs justice like a drowning man needs air. For that justice to be real we need to send a message to anyone who comes after that even for the president there will be absolute accountability. Without that there may be a pause in the growth of power that has taken America into the chilling realm of fascism but it will continue.

Republicans who care about the principles that made them Republicans need to shoot their own dog. That is what real men do. Rumor has it that mixed in with those murmurs in the halls of Congress were the voices of Republican Senators and Congressmen who are considering how the public now views the Republican Party. That this has been a public relations disaster is true; but that is a minor issue. Real men and women do the right thing even when it does not provide better political positioning. In the last two years the Republican Party has lost registrants, respect, credibility, and now teeters on the edge of oblivion. That was just, people were speaking with their hearts and feet. It would be better that the Republican Party cease to exist than that it remain the tool it became. Political parties are the tools we use to move our country towards freedom and justice. They should not be used to steal. Political parties are just tools.

The point of the American Experiment is that people, understanding that their rights come not from government but from God, come together to govern themselves from their own communities.

Republicans must therefore shoot their own dog. It was not a Democrat who delivered the message to Richard Nixon, it was the man that both sides of the Aisle knew would tell the truth. That man was Barry Goldwater. But what Nixon did was a cigar to what Bush has done. This message must come with the hard truth that resigning is not enough. This time we need real, systemic change so that never again will the simple tools of government be used to anoint would-be dictators.

That process must begin with unified efforts from both sides of the aisle.

This impeachment must not be tainted with politics. It is about the survival of America and the vision of possibility that summoned a nation of free people into being.

Cheney must be impeached and replaced with a man of unquestionable integrity, respected by both Republicans and Democrats. That man is Congressman Ron Paul.

Congressman Paul is a man who had the moral integrity to do the right thing when the days were darkest. Paul has withstood the attempts by NeoCons to unseat him many times by redistricting, through Tom Delay, and by funding his opposition. But his constituents know he is to be trusted and have returned the family doctor to office over and over again. He refused to be silenced.

Democrats who have followed the machinations of the NeoCons know Ron Paul is a man who stood up against the War in Iraq, against the Patriot Act, and against torture.

The names championed by the Democrats speak partisanship; none of them spoke out in those darkest days. Paul has demonstrated an ability to work with anyone who is working for the rights of Americans. He understands the Constitution and no one deceived him when the cries of necessity went up after 9/11.

The present sentiment for impeachment could tear America apart – or it could bring us together to start again. America's President is both the CEO of the executive branch and a symbol of forward direction. Ron Paul as President sends a message no one will misunderstand. When he is in office, let Paul choose Dennis Kucinich as his Vice-President.

Impeach Cheney and then Bush and then let Congress put a man in the Oval Office who said yes to honor and truth when doing so made him so often stand alone. It is alone we enter life and alone we die. Those who stand alone when others are silent through fear have passed through a tempering that burns out doubt. We need an individual who has passed through that fire.

Send a message America, and the world, will really hear.

Posted by Melinda Pillsbury-Foster at 11:00 AM

Paul's not a bad option for the Presidency, but you're missing an obvious campaign option: Exhume Goldwater '08.

Putting country before party...What a concept!

Wonderful dream, too bad it won't work. The 25th Amendment provides that when there is a vacancy in the office of Vice President, the President will nominate a replacement which must be confirmed by majority of both Houses of Congress. Getting Congress to confirm Ron Paul is imminently doable, however even Clueless George could figure out that as soon as Ron Paul was Vice President, his ass was grass.

Hey Melinda. If and when he's impeached, then I'm going to show all my chicken friends the true nature of what he's been up to. But right now they just couldn't handle the truth.