Americans vote NO on Bush and take Impeachment off the table 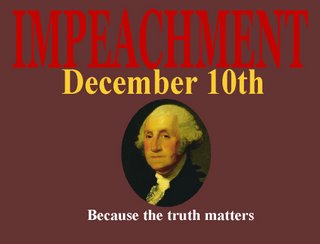 Mark your calendar. On December 10th, Human Rights Day, Americans from across the country will meet to discuss the Impeachment of George W. Bush and Richard Cheney, President and Vice-President of the United States. The congruence of Human Rights Day and consideration of Impeachment is curiously appropriate. What better day to begin the process that is so needed to mend the lives of Americans?

While Nancy Pelosi considers the color of her drapes and tables discussion of an impeachment sentiment that propelled her and other Democrats into office Congresspersons ready themselves for oncoming rounds of business as usual. They expect the voters who put them in office to wait. They will be surprised. Americans are tired of waiting and have grown increasingly cynical about the character of those elected. It is all, too true, that the accumulation of power that now exists in Washington is a powerful incentive to forget that the election was not a popularity contest or a mandate. November 7th was a loud NO to Bush and his NeoConservative administration, nothing else.

On December 10th the people are setting about taking action themselves where normally they simply write letters to their representatives. Trusting those in government has come to be recognized as a chancy policy. David Swanson, an organizer for the December 10th event, said, “the blockages to impeachment we are seeing are from Congress; Republicans who are scared, and from newly elected Democrats who have other priorities.” When those elected fail to carry out the will of the people it is the right of the people to take action directly, according to Thomas Jefferson.

Last November 7th Americans made it clear that they are fed up with the present administration. That did not mean that they were enchanted by the alternative, just that their options were necessarily limited by the nature of the political process. Reports of malfunctioning voting machines that moved votes to Republicans and away from the determined efforts of voters to vote otherwise, were legion. Law suits and investigations are now ongoing but even voter theft estimated by experts, such as David Griscom, of around 3.5 million, was not enough to keep a Republican majority in either House of Senate; a miscalculation on the part of Karl Rove, most probably.

The massive turn out of voters from the left was balanced on the right by voters who stayed home, unable to vote for anyone acceptable. As of today, 51% of Americans want to see articles of impeachment delivered to the White House and they want answers from George Bush and Dick Cheney. That is, perhaps, the largest percentage to ever express the wish to see the President of the United States answer questions that include whether or not he should continue in office.

Americans have their reasons, and they are powerful and compelling.

Every day now American families learn that loved ones have been injured or killed in a war that is now admitted by nearly everyone to have been sought not to ensure the security of Americans but to burnish the bottom line of Bush's core constituents, the oil companies and military contractors who have been intimates of the Bush – Walker family for generations. For at least three generations the Bush family has made its money not from honest commerce but from special favors obtained through the offices of government influence. Former First Lady Barbara Bush unwittingly exposed the attitude of the Bush family when in the wake of Hurricane Katrina she said, “This is working very well for them." Mrs. Bush saw the loss of family and friends, long time homes, neighborhoods, and family possessions are less valuable than the charity on which they were then dependent. No decent person would agree. It is ugly, but when you strip away the pretensions that is who they are. .

In the wake of 9/11 George W. Bush enjoyed unprecedented popularity. His administration used that trust, extended from Americans of all political parties, to procure a war that has lasted longer than World War II, and cost the lives of nearly 3,000 dead American military, if we are to believe the State Department, which is now also questionable. Stories of dying military shipped out to bases away from the hostilities in Iraq have left open the question of how many have actually died and been wounded. In this war, families faced the need to send essential equipment to those they loved who stood in the line of fire, another first for America. Veterans of Iraq come home to neglect and dismissal by those entrusted to care for them.

It is the sense that nothing this administration says can be trusted that has led slowly to the conclusion that it is time for Bush to vacate the Oval Office and Washington D. C. “Stay the Course” has morphed into, “What? I never said that!” so rapidly that it leaves listeners gasping. It is as if they believe they can reinvent reality as needed.

Recently, Bush has found time to buy a new home off shore. Perhaps he plans to take up residence on the massive spread purchased in Paraguay. As we have learned, Paraguay does not honor extradition so that, also might not have been an accident. While there is no exit strategy from Iraq Bush might have had one handed him by Rove for his exit from the White House.

At the same time, in parallel, Americans are contending with assaults on their rights, their pocketbooks, and their persons in ways that would have been unimaginable just a generation ago.

From the takings of the Trans-Texas Corridor to the sell off of assets held by the Federal government for the people of America, to the rescinding of the 4th Amendment and the rampant corruption of our nation's courts, the issues abound. Americans are drowning in issues as the economy goes South and the popping of the real estate bubble threatens to leave Americans tied to homes that are worth far less than they cost. It is as if there was an unannounced going out of business sale and up for purchase is all property held or controlled by the government paid for through the taxes of ordinary Americans.

George W. Bush will doubtless go down in history. It is shaping to be a legacy of greed, avarice, indulgence, and deceit that would make Nero blanch; the actions of George W. Bush follows a logic that is consistent to his family's heritage and to his own well documented, personal values. It is not that the Bush – Walker family does not have values, it is the content of those ideas about themselves, government, and other people's money than has proven to be so toxic to the well being of America.

In the first and last instance, the question always returns to our beliefs and values. Values are the foundations on which America was built.

Our nation was founded by a people who gathered in homes to discuss the issues. The Committees of Correspondence discussed the theory and grounding for government as a tool of human organizing. They discussed the individual, God-given rights, and their freedoms. America was a do it yourself enterprise then. Evidently, it must return to its roots.

On December 10th remember the values than brought America into existence. Remember the many, many individuals who risked everything to make a vision real. Remember the people who will gather across the country to consider the issue of impeachment. From these beginnings much will spring. America renews itself on the courage of its true patriots.

Posted by Melinda Pillsbury-Foster at 7:27 PM