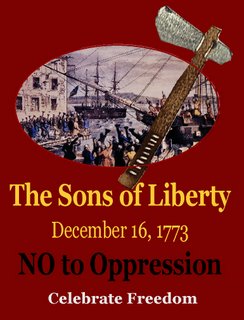 Visit our Cafepress shop for the graphic!

On August 14, 1765 a small group of colonists came together to form a secret society in furtherance of independence. They first met in Boston under a tree located at the corner of Essex and Orange Streets near Hanover Square. They had gathered to protest the Stamp Act. When they left they had founded a secret society that would promote independence for the colonies, a front line for action. Effigies of two tax collectors had been hanged from what was ever after known as the Tree of Liberty.

The Sons of Liberty came into existence because awareness was growing that action would soon be necessary. As the 233rd anniversary of the Boston Tea Party approaches all Americans should take a moment to thank those stalwart men who agreed on the need to preserve the autonomy of the colonies and took action. Today we have lost sight of the specific events that motivated the dumping of artificially cheap tea into Boston Harbor. But the reasons went to the insistence of the colonists that they were free, a truth we should never forget.

The colonists in New England had served in the French and Indian Was fought out far to the west of them but since they were not allowed representation in the British Parliament they rejected the idea that they were obliged to pay for that war.

In the wake of the French and Indian Wars the British Crown demanded payment for the expenditure of monies that war had cost the Crown, this despite the fact that the war was the continuation of a territorial conflict between the British Crown, France, and Spain. For Britain, the spoils of war was Canada, ceded to them by France. The colonists saw no reason that they should pay for the adventuring taking place far to the west of their own hard won colonies. But Britain had decided that the independence of those colonies, now developing and profitable, needed to be brought under firm control and used the War, which ended with the Treaty of Paris, February 10, 1763, as their excuse.

The Crown was well aware that the colonists were used to governing themselves; after all, that is why the Puritans had gone there in the first place. But by imposing a tax the Crown hoped to both raise money and at the same time assert the right to impose whatever policies the Crown wished later.

Imposition of the Stamp Act and the Townsend Acts in 1765 and 1767 were, therefore, a strategy aimed at both augmenting income to the Crown and establishing grounds for further control. This was clear to the colonists. Tensions rose, erupting in the Boston Massacre in 1770.

Many Americans could see where the actions of Parliament were taking them and began to prepare for war in their towns. The Committees of Correspondence started meeting to read and discuss the causes in detail. The population as a whole was alive to the issues and well informed.

The Boston Tea Party took place on December 16, 1773, the culmination of that campaign by Parliament to coax colonists into establishing the right to tax. The previous Stamp and Townsend Acts has been rescinded, leaving only that small tax on tea. The Crown put the first part of the agenda, raising money, on the back burner to establish the principle that they could impose control without representation. The colonial leadership in Boston was determined that their plan be thwarted. American freedom was not to be purchased for the cost of cheap tea.

Three East India Company ships entered Boston Harbor. They were confronted with the sight of a crowd of 7,000 colonists, talking and shouting. That morning a group had met at the Old South Church and voted to demand the ships leave the harbor without paying the required duty. A delegation was sent to the Customs House to demand the ships lift anchor and leave the harbor. The Collector of Customs demanded payment; the ships would not leave otherwise.

A cry went up from the milling throng when this news was relayed to them. The response came just a few hours later from the Sons of Liberty.

“It was now evening, and I immediately dressed myself in the costume of an Indian, equipped with a small hatchet, which I and my associates denominated the tomahawk, with which, and a club, after having painted my face and hands with coal dust in the shop of a blacksmith, I repaired to Griffin's wharf, where the ships lay that contained the tea. When I first appeared in the street after being thus disguised, I fell in with many who were dressed, equipped and painted as I was, and who fell in with me and marched in order to the place of our destination.”

In 1834 the above report by George Hewes would be published. Hewes, then a very old man and one of the few surviving participants, reported that the group had marched in costume down the nearby hill where they had gathered, two by two dressed in Indian garb. They divided into three groups and made sure that the tea was no longer an issue; rowboats of men later made sure it was unusable. This resulted the next spring in the closing of Boston Harbor by order of Parliament.

The Sons of Liberty had adopted the forms and terms of the Iroquois tribe for their own secret rituals. When the Revolution began they extinguished their camp fire and picked up arms to fight in that war. Uncertain whether or not the new government would be stable they remained a secret society, ready to take action as necessary, until after the War of 1812.

In 1813, at historic Fort Mifflin near Philadelphia, various groups that were descended from the original Sons of Liberty had come together to form the Society of Red Men. In 1847 they would again meet at Baltimore, Maryland and found the national organization called the Grand Council of the United States, the Improved Order of Redmen. The Red Men is one of only three organizations ever chartered by Congress. That bill was passed by the 58th Congress 2D Session. March 15, 1904.

Over the Nineteenth Century their form had changed but they continued to impact the course of American life. The Revolution had been capitalized by the blood, sweat, and tears of ordinary Americans, asserting their right to determine their individual and community direction and culture against the greatest super power in the world as it was then. The America that was coming into existence would confront a series of crises that carried forward the same theme with different players. Will the people govern themselves or will they be subject to the control of others?

At the same time ordinary Americans were confronting the fact that a newly mobile society had needs for social insurance to spread the risk of events in the lives of individuals. In 1867 the Benevolent and Protective Order of Elks came into existence to ensure that its members and their families would be cared for in the event of the death of the head of the household. The need for security of this kind resulted in an explosion in fraternal orders and programs aimed at ensuring that disaster would not destroy families. The Masons, the Foresters, the Moose, the Eagles, Woodmen of the World, and the reconstituted order that sprang from the Sons Of Liberty saw the need and began providing social insurance programs for their members. From those programs Teddy and Franklin Delano Roosevelt plucked the plans for such programs as Social Security, transferring these to government to be funded through taxation instead of through membership fees.

The variety in fraternal orders had allowed Americans to choose one that suited their needs providing for their own security while extending the benefits of their efforts into their communities. The take over by government began the slow but steady process that converted control by the people to control of the people.

The purpose of the fraternal orders was to see that Americans had in their own hands control of their security and well being. In the hands of the fraternal orders the costs of maintaining these programs remained low; retired businessmen administered them as volunteers. Since this was money they had raised themselves they counted every penny. With Government in charge costs and administration grew astronomically from then until today. Only when the people are in charge are the rights of individuals protected.

On December 16th America will celebrate the 231st anniversary of the Boston Tea Party. It is an occasion that has been overlooked and neglected for far too long. The date marks the occasion when a small group of people thought through the issues and took action that kept control local, changing the future of the world.

This December 16th many of us will gather to read the account of Hewes, toast the Sons of Liberty in whatever beverage most pleases us, and hold a moment of silence for those who took the actions that lead to Lexington, Concord and finally to the Declaration of Independence, establishing for the first time in human history the principles that each of us possesses our rights directly from God and through no king or government.

By steps we became free; by the same small steps we could return to serfdom; that was the possibility that kept the Sons of Liberty active long past the ratification of the Constitution. The events that set our original course speak a truth we need today to turn America back towards the foundation of God-given rights that changed the course of history. The cost of liberty will ever be eternal vigilance and the willingness to take action.
Posted by Melinda Pillsbury-Foster at 4:13 PM