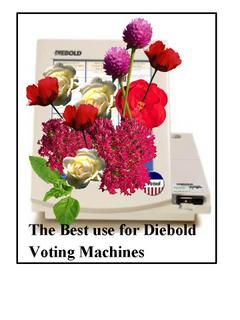 Good News: Voter fraud can be handled easily and without voting machines.
Better News: We can also inject some backbone and ethics into the body politic
Best News: The truth really can set you free.


The model that our Founders had in mind when they were working out the forms for America’s elections were clear and simple.
Stand up and be counted. Literally.
Most of them came from towns that used the yearly meeting to settle issues. Some of those issues were strenuously debated. Voting was accomplished by raising hands and counting. The secret ballot was a concept beyond their experience. At the close of the Revolution in which so many of them had fought and died the idea that any individual would be unwilling to stand up for their vote when they had so recently risked life, fortune and honor for their freedom would have seemed alien.
So how does this relate to the issue of fair and just elections and Diebold voting machines?

It goes to the issues of our cultural insistence on confidentiality, the character required to exercise franchise, and the real value of reputation.
There is no right to privacy in the Constitution. No one back then imagined that the Constitution would be used to assert a right to deceive others. Nowhere is it written that there is some convenient privilege to pick up and leave behind obligations voluntarily assumed and fail to reveal those liabilities to our new circle of acquaintance No one imagined a world where a sexual predator would be released from prison and move next door to you and your child without your knowledge. .
Such an idea would have astonished the Founders. A person was their word, and a signed piece of paper could not change the moral bankruptcy of the individual who defaulted.
The Founders all came from small towns and a sprinkling of cities where it was sometimes impossible to be unaware of the reputation and history of most of the people living nearby, either first hand or at one remove. So reputation, your personal history, was the bottom line in the currency of trust.
A good reputation was an asset. A bad reputation was a liability.
When honorable people fell on hard times the community’s extended help was often modified by the reputation of the individual needing assistance.
Demeaned as small mindedness by a generation eager to issue itself unearned wealth in counterfeited reputation the very concept of reputation was replaced by the concept of ‘privacy’ and complicated further by dividing our lives into ‘personal’ and ‘business.’ It was an idea with all of the validity of allowing government to print money unsupported by an objective standard of value.
Bad ideas drive out good when they enable theft. When that happens we are allowing an inflationary standard for truth, assuming that reputation has no real meaning. But, of course it does. Most of us reveal who we are most clearly to those with whom we share the most intimate ties.
Men who abandon their wives and children, women who deceive their husbands, men batter and who drink the family income, each of these earns their reputation.
Those who insist the most loudly on privacy are generally those with the most to hide and the sappy assertion that individuals behave differently in their personal and professional lives may well be in for a shock when the cash box disappears.
The right to privacy has impeded our ability to know each other and therefore driven up our transaction costs in relationships. The insistence that we be able to vote anonymously, a whiny divorcement from responsibility, created the essential avenue for stealing elections, the crisis that now confronts us via the Diebold voting machines produced by Rapture Republicans and armed with software backdoors by the Neocons, Unlimited.
So the answer to the problem is to start standing up to be counted on Election Day.
It can be simple. Perhaps we could even vote from home, many of us. Your vote and the votes of your neighbors could be available on line. You can go look – and Americans will do just that. An increase in interesting conversations across the back fence could be counted as an advantage, not that many of us will really be surprised.
Changing how we vote may then also make us think who we are voting for – and that could be a change that is even more sorely needed today.
Posted by Melinda Pillsbury-Foster at 3:27 PM