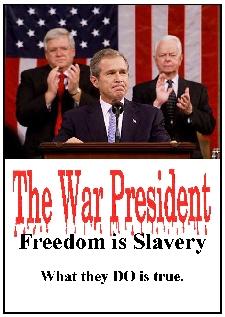 An Honorable Rhetoric; an Ugly Reality - The Bush Inaugural Address

When my oldest son was small I always knew it was time to examine his activities when he felt moved to tell me multiple times that something was true. So when he told me that it was not he who blew up his sister’s Cabbage Patch Doll in a glorious display of the power of gun powder collected from caps I knew perfectly well who had reduced the cherished plaything to a shredded pile of lettuce leaves. Parents know this. Frequent repetitions of such denials drive the point home.
This familial insight becomes politically relevant when considering the content of the recent inaugural address delivered by President Bush. If you use the vision of “freedom” and “liberty” that many times you are not talking about either. But your actions will outline the bald truth.
Do not mistake rhetoric flights, no matter how filled with blandishments of surpassing beauty for anything but public relations. Their emoted words do not match reality but such effusions do provide us with valuable insights.
George Bush used the words ‘liberty” and “freedom” over forty times in that recent speech. He gave that speech surrounded by more security than has ever stood between a monarch and his subjects at any time in history. So turn down the volume control on your mind and watch what he is doing. It is what they do that is true.
We have invaded a foreign country and plan more of the same.
We are selling the natural resources of that country to pay our costs and to make a profit.
We are ignoring the continued presence of terrorist’s threats.
We must now tolerate the presence of an internal military police force miscalled “Homeland Security” that is mandated to spy on us, imprison us, and take our property with impunity.
Our right to free speech is under fire.
Women must again worry that they might not be the ones who ultimately control the right to choose whether or not to give birth.
Marriage, and the definition of the same, has become a matter of state policy. Military serving in Iraq are sent in harms way without body armor.
Our returning veterans are ignored to death.
The message conveyed through the clear lens of reality bears no relationship to “freedom” or “liberty,” two words denoting the emancipation of the human spirit to choose for itself the course most resonate with our sense of the sacred. It is not freedom when we cannot speak out; it is not freedom when we dishonor our obligation to veterans. It is not liberty when the government usurps our right to choose for ourselves. It is not freedom we protect when we use lies to justify an invasion. We are not thus made more secure. Freedom is nowhere in that equation.
A true liberty is founded only in the empowerment of individuals. Our government was originated as a tool to let a free people govern themselves, providing for a common defense and for such services as they were unable to supply for themselves. That has not changed. The vision of America is still valid. If there is a difference it is that now we have many more ways to provide those services without recourse to government.
In each of these matters the rhetoric used by President Bush fails the test to match reality. Each day that slips by finds us less free.
As our Founder Benjamin Franklin said, “Those who give up essential liberty to purchase a little temporary safety deserve neither liberty nor safety.” He was right. He would have been confounded by the world today, shocked by the use of rhetoric as a means of deceit.
Who among us has not experienced those who lie to get their way? We must not let the trappings of power overcome our discernment. We must not become afraid to speak out. It is bad, but it can get worse.
This administration has institutionalized the use of political operatives in the media, paying these agents for presenting their assertions as objective fact. In the case of Health and Human Services head Tommy Thompson, syndicated columnist Maggie Gallagher was paid a reported $21,500 from the Department of Health and Human Services to help promote administrative proposals. This is a species of lie new to politics; a conversion of the formerly independent media into an arm of the administration.
It is impossible for ordinary Americans to know what is happening under the cover of authority – but we can watch what they do and compare it to the rhetoric. And as the two diverge we can judge them. Turn down the volume on the rhetoric. Actions speak louder than words.
Posted by Melinda Pillsbury-Foster at 7:42 PM