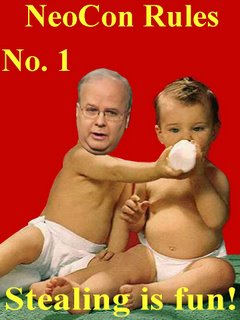 How Bush, Senior helped Rove become a better thief using environmentalism.
You can buy the tee-shirt on line at: www.cafepress.com/stopneoconning

When we think of Karl Rove and his cadre of cronies and clowns
we forget the Karl Rove who started as the chubby little nerd on
the play ground, scared of the bullies but determined to win by
other means.

Now, when it looks as if George W. might be going down it is
doubly important not to take for granted that they'll depart
gracefully.

Consider what they are willing to do to hold on to power.
Losing may not be just leaving office;
but also facing prison time.

Someone like Rove, who sees contingency in terms of layers
upon layers, secrets within secrets, has had years to plan his game.
You will witness the introduction of those contingencies, seeing
how they float, the abandoning those that don't, and a keen focus
on those that play well in Peioria.

Slight-of-hand Rove will pull out every trick he has ever learned,
while relying heavily on the network of political cronies who he
can trust because he owns them. Old J. Edgar's files of nasty facts
look like a child's trivia compared to what Rove has assembled.

Get ready to really find out who these people are.

Consider every facet of government and the corporate world that
is aligned with Rove and Company, and consider how it can be
controverted to other purposes. Team Turd Blossom will apply
the lessons of life in ways that would turn any decent American's
stomach. Remember, these are the experts, true professionals
at playing dirty.

Who and what the NeoCons are is a continuation of grade
school on steroids. They did not grow up, they simply lost
their hair and plumped out. So it is time to consider again
in more detail the Rules for NeoCons.

Rove was an eager learner, observing the schemes and
ploys of those he got to know who were successful. Rove
was first hired on, still spouting a full fledged case of teen
aged acne, by George H. W. Bush in the early days of
Watergate. What were Rove's skills that attracted the
Chairman of the Republican National Committee, Mr.
Bush? It was because of young Rove's promise as a
political trickster. Rove had successfully stolen a
Young Republican election and boasted about trashing
a locallegislative race to favor the Republican.
Papa Bush recognized rookie talent.

Rove therefore had a front row seat in studying the
clever machinations ofPapa Bush at first hand. That
was the early 70s and Papa Bush was then putting the
finishing touches on his take over of the Environmental
Movement, a move he, Maurice Strong and OR Anderson
had planned to stave off the ominous threat of alternative
energy thus ensuring thatthe bottom line of oil profits
stayed burnished for many happy years to come.

Bear in mind that it was Bush W.'s father the good Senator
who first introduced America to Richard Nixon of Watergate
fame back in theearly 1950's.

Just picture in your mind, Rove, his eyes alight with excitement,
making note of how to hijack a movement by quickly building an
alternative in its place to deflect credit, interest and income.
Adding this sneak attack to his growing book of dirty tricks
must have sent shivers of delight down his soft spine.

And they probably conned you, too - remember Earth Day?

If you celebrate Earth Day in April you were conned by the
people who did so much to teach Rove his trade. The real
Earth Day takes place at the United Nations on the Spring
Equinox with the ringing of the Peace Bell. The commercialized
Earth Day takes place on April 22nd the anniversary of the
McCarthy/Nixon televised hearings on the infamous 'Red Scare'.


The original Environmental Movement, focused on educating
people to the on viable alternative energy options they could
use to replace oil fizzled out like a wet fire cracker. Most of the
Left accepted the ploy and sent checks to support Earth Day
April 22. You can't give them any credit for discernment.

They had been raped and haven't even noticed.

Rove finished his schooling under the masters and went on to apply them elsewhere.

Unfortunately, Rove not being too creative himself always endlessly recycles the tricks he has learned.

That is what happened. If you are, like me, a Republican dedicated to the ideas of freedom and justice you will start to see how our movement was also subverted. You heard it here.

Our next lesson will be on Rove's use of political operatives, Yammering for Fund and Profit: 102.
Posted by Melinda Pillsbury-Foster at 12:55 PM No comments: 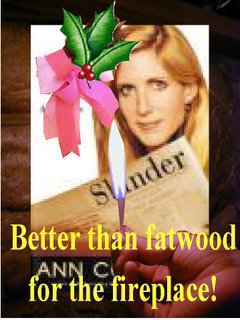 Now that the Patriot Act is just barely behind us, the ink still drying on the pages of the Congressional Record, an early Christmas present all Americans should appreciate, it is time to consider how the NeoCons, managed to suborn the system for their fun and profit. It was well planned and executed though they have now hit some rocky spots on their carefully planned road to a real American Serfdom for us and the establishment of an American Baronage for them; an amazing accomplishment.


No one can deny that they are ever so clever and we should not fail to give credit where it is due. Karl Rove's finger prints are all over the globe.

One of those answers lies in the perusal of used book stores. I noticed some time ago but had not put the parts together until recently.

To feed my addiction to the printed word I spend a lot of time in used book stores. The piles of nearly new books by such NeoCon Blogscreechers as Ann Coulter gave me pause. The time between purchase and deposit in the used bin hardly seemed long enough to allow the books to be read. And most of the ones I thumbed through did not appear to have been 'used,' for that matter.

It gave me pause for thought. Thought lead me to the ever ready websites that touted these books along with their authors. Not surprisingly, most come out of the same publishing houses. Three Rivers Press, Crown Forum, Regnany. A brief perusal of their authors reveals other interesting insights. The NeoCons live in a very small world.

The authors of these books, along with acting as spokespeople for the range of points necessitated by the policies on which rest the NeoCon POV also provide other valuable services. Along with the white males there are tokens of otherly ethnic and gendered persons. If you put together the right graph you can see how they all fit in, promulgating opinion in those areas that were essential to their larger strategy. Examined, it is actually rather simple minded. But it worked.

With the right message you have to have the right messenger and so we fill in those little places on the graph. There are links from those sites to a mass of sites that are NeoCon clubs, for instance the Heritage Foundation. Having attended some of the functions at similar organizations associated with the folks from NeoConland I now know that these organizations push books and often will give them away to loyal supporters who are attending expensive conferences that allow them to hear first hand what they are supposed to think; opinion pronounced by those same authors.

The degree to which each opinion maker knows how their opinion is being used would vary, of course. For some it would be a little like being discovered in the coffee shop in Hollywood and advancing immediately to the big leagues with a contract for three movies. Some books by their regular cadre of political operatives, for instance John Fund, would have been planned and assigned in advance.

What if to accomplish your political ends you knew, say 20 years ago, you would need to produce the appearance of public support? One relatively cheap way to accomplish that would be to identify and fund a cadre of writers representing the 'points' of your political agenda and ensure that the books they produced, flowing from their eager fingers like guano from a gull, would register big time in sales.

Wow, the media would say, these people have their fingers on the pulse of America. Interviews and respect would automatically ensue. Media people respect anyone who can manage to be paid for talking or writing.

This simulated public presence also translates into a real presence because so many people interested in politics want to go with the 'winner' in this case the one whose books are selling and who are on the screen talking to America about their shiny new ideas. It is also a clever way to pay off the writers, who are in effect political operatives paid through royalties.

Additionally, your opposition goes out and buys the books to respond. Those might be the most satisfactory sales of all to Karl Rove.

This is supposition on my part, of course. I went in less than 20 books stores in three states checking out the stacks. But it is very possible for us to find out if this is true. All we need is a website, free on yahoo, that lets folks list how many books they found on what day in which stores. Outing them on this would be delicious. I am really hoping that some interested Internet savant does just that.

The cleverness of the whole has Karl Rove stamped all over it.

Now, how to respond to this strategy.

These books sell cheap, needless to say; many book store owners repined that they are impossible to sell so removing them from inventory saves space, usefully recycling them to a higher purpose is therefore both a public service and a necessity. So in the spirit of charity and the season such books could be made available to low income people living in areas that are experiencing the sharp rise in heating bills and used to generate some real heat in their fireplaces.

I can just see St. Nick coming down on a pile of crackling Coulters. That will warm his old heart.
The thing about the Rove strategy, and this was a component of their ongoing war on America and Americans, is that it may not make sense at the time but in retrospect you see what was really happening.

Visit your local used book store and clean out your fireplace for use this Christmas Season. You will be glad you did.
Posted by Melinda Pillsbury-Foster at 6:39 PM 3 comments: