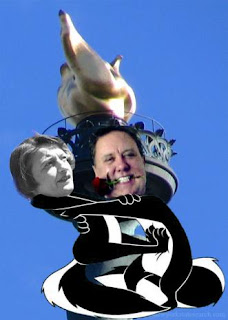 
This article is dedicated to Nathaniel Branden, who recognized Craig Franklin as bizarre while we were in therapy with him, and to Craig himself, who, still trying to achieve his fantasy, illustrated in one story line, how psychopaths impact our world, from the personal to the hidden reaches of corporate profit.
Posted by Melinda Pillsbury-Foster at 2:43 PM No comments: