How to Boot the NeoCons and Reboot America 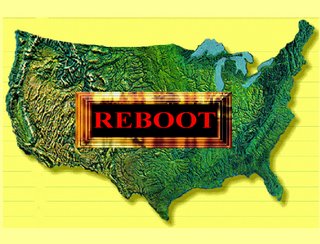 As the summer approaches events within the intimate world of the NeoCons move towards some as yet unseen crisis. The doubtful face of of a 'terrorist' is paraded across the screens of the world. Was he Zargawi? If so, did it really matter? The desperation of this administration for distraction is palpable.

While Ann Coulter claws toward another best seller, positioning her self as a real Christian, what response would Jesus have to her harangues as she uses the gouged and bloodied emotions of 9/11 victims as the grease on her chariot? At the same time this administration has asked that she be accorded counsel in her felonious activities in Florida.

Blood and diatribe have always sold before. Will they still sell when Coulter's good looks are obviously on the wane and her aggressive nastiness is on the rise? Or will Coulter be abandoned by those to whom her injection of spin have been so valuable?

At the same time those concerned about the honesty of the election process watch the curious unfolding of an election aftermath in San Diego that sent the chilling message that there are many ways to steal elections. There, the Busby/Bilbray election for the U. S. House, 50th District, is still an election with votes, numbers varying, to be counted, if those ballots can be found and identified.

At the same time other matters are finally moving towards a long awaited conclusion. The John Fund trial has been scheduled in New York. Fund is finally going to face a jury over the accusations that he battered his live-in girl friend, Morgan Pillsbury.

From foreign policy to the highly personal, the world of the Neocons has become a minefield of potential explosions, any one of which could set off more reverberations.

And in the highest echelons of both the Democratic and Republican Parties the most important points for discussion are how to use the eminent demise of Neoconism for their own purposes. As the danger from this administration wanes, the danger from their wannabe replacements is on the rise.

There is no reason to believe , given the past history of either party, that the purposes of anyone now in politics will include rescinding the ceaseless attacks on the rights of Americans. America must face the fact that while Democrats stole less they set up the scenario that the NeoCons took to its logical conclusion.

Never have the American people seen more clearly that if the answer is politics then it must have been the dumbest question anyone ever asked.

The time has come to look at real alternatives, chief among these a unifying move to a coalition that crosses party bounds. Party politics is as morally bankrupt as this administration. We need a real change, not of those in office but a change of who controls our lives.

The right answer is us.

The original Revolutionary War vision was not for a centralized state; it was for a people who governed themselves. It was not for political parties, who use power for their own ends, but for local governance, and individual rights for all of us. That vision was obscured with the failure of the founders to ignore the rights of blacks and women with the “Great Compromise” in 1789. From then on it was just a matter of time. If we refuse to acknowledge our mistakes then there is no learning curve and no hope for real progress.

The reaction to the tragedies of slavery and the subsequent, continuous violations of individual rights for women and the erosion of moral virtue in government during and after the Civil War eventually brought about the promising and attractive theories of Herbert Croly, whose book, written in 1909, The Promise of American Life, begot the Liberal of today. The road to hell is paved with by the good intentioned who failed to examine the causes of past failures before installing mistake 102.5. Icons, generally passing into history unquestioned, can cause a lot of problems.

Did centralized government work? No, it opened up more opportunities for the corporatization of what remained of our freedoms. The Left also needs to take responsibility for sloppy thinking and for not seeing what was happening before their eyes.

Right and Left, there is blame enough to go around. Instead of wasting time with blame we need to examine those mistakes with candor and reboot. To have installed a new, untested program, like Progressivism, as government served only to obfuscate the mistakes of the past, adding new mistakes on top.

Today, we better understand the need to examine theory, beta test, and apply such standards as impact reports before cheerfully operating on the lives of millions.

That is the past. Now, we need to do better.

We are all Citizens of the United States. The idea that we owed loyalty to a Party or to the jingoistic and power serving icons constructed to distract us from our Founding vision refuted the real loyalty we owe to that unrealized dream.

When you look to the White House, Congress, or the Supreme Court for relief remember you are giving them power they have always abused.

America became the voice that called to those who hungered for freedom and opportunity not because of government but because through the acts of individuals, using the opportunities a partial freedom created, individuals realized some small part of that original vision despite government – and only here had that vision been accessible to everyone.

As Americans and as individuals we need to take action. We need a common agenda we can carry out as individuals, choosing freedom and making our own communities true to the original vision. Those means are in our hands right now.

Get off the grids. Examine who profits when you continue to use the technologies owned and controlled by those Bush acknowledged as his “Core Constituents.” The mega corporations bleed us from every part of our lives. You can change that. Technologies to go off grid are available now and more are on the way.

Turn off the faucet and let them find their own water.

They know all too well that it is not us dependent on them but they who depend on us for the payments on their islands in the Caribbean and the other symbols of their ill gotten gains. You fire them when you turn off the faucet and get off the grids.

Look at your own community. You can make it better, make it work as people helping each other. And finally, build unity. Forget party politics. That is a game that has played into their hands and the time for playing their games is over.

We can and will hold them accountable. Everything they have done makes them liable. It is time Ann Coulter had to get an honest job, maybe working at MacDonald's handing out Big Macs; let her look into eyes that see her for what she is. Let John Fund have a place slinging fries; Karl Rove and company can take clean up duty or staff the drive through line. And then George W. Bush and family can do the pick up duty outside. Prison is too good for them For once in their lives let them understand.

America, an idea whose time is coming - as soon as we reboot the system.
Posted by Melinda Pillsbury-Foster at 7:50 PM 1 comment: