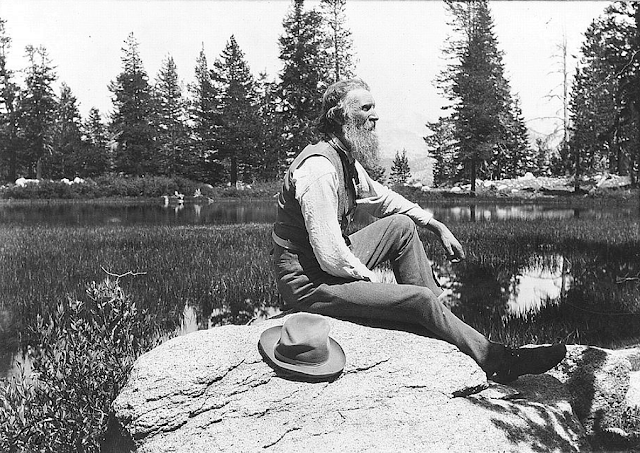 Since the LOC does not list the photographer I can assume Arthur C. Pillsbury took the photo.

John Fund never disappoints me.  In this instance he states that the National Park Service was founded “Last week,” meaning in 1920.  But the founding date was August 26, 1916.  Fund then defends John Muir, an action with which I agree as I was aware after dodging service in the Civil War in Canada, he eventually discovered First Nations people were like everyone else.

Certainly, Muir would have objected to burning out the Miwuk, the First Nation people of Yosemite, in 1869, much less when the National Park Service burned out the last Miwuk living there, Jay Johnson, in 1969.  The Sierra Club said nothing.

I interviewed Johnson at his home in 2017.  That is what he said, and he was there.

The National Park Service also continues to stall on the decision the Miwuk be allowed to have land for their use in Yosemite Valley.  Last time, the NPS demand was that the Miwuk conform with building codes.  How do you do that when the whole point is recreating their living heritage?  I follow these amazing idiocies on our newsletter, IMAGE.

Was Muir appropriate on all issues?  No. But he would have gotten that one right.  This raised the question of how we identify those who should be reassessed.  We need to add the National Park Service as well as the psychopath who founded the government agency, Stephen T. Mather.  Mather represents a fond ideal for elites as he never earned an honest dollar in his life and managed, with much assistance, a century long cover-up.  Mather was the consummate self-dealer, first in the private sector then moving up to Federal.  Do you imagine the Sierra Club was unaware of the facts?  Not credible.

Did the National Park Service object to the taking of the Hetch Hetchy?  Nope.

A read of the books written by former rangers reveals much disenchantment, and to this we must add a dialog on how to allow people to apply proven approaches to preserving the environment while making our wild places visible to millions.  Do you think government should be involved?  I vote NO.

Fund’s article was, as usual, filled with evasions and quotes from others since he really knows little about anything.  His career in journalism came via hiring to limit and manicure what we think.  This was noted during his internship at Evans and Novak in 1983.  They decided he was perfect for the Wall Street Journal.

The assertion Muir, an outspoken Preservationist, ‘founded’ the Sierra Club is a fiction marketed by the people who carefully hide behind the scenes, an early chapter on how the Elites manage what we know. It was their families who were responsible for incorporating the Sierra Club in 1892.  Charter Members   No, it was never intended to be a club for hiking.  And those early High Trips were an extension of the High Life those people have grown accustomed to after raping the environment in California to extract their fortunes.

Muir was a Preservationist; most of the founding members of the Sierra Club were Conservationists.

These same people, today, are the elitists who buy NeoCons like John Fund.

The Sierra Club persuaded Muir to become the President but he occupied the office; others controlled the operations.  The organization was started to ensure real estate interests and the emerging elites, descended from people Muir despised, mentioned in the Fund article as, “The white population, the people who were invading — the frontier types, the miners — he thought they were uncouth, savage, brutal, dirty, given over to alcohol. His (Muir’s) writings are full of those descriptions.”

This characterization was mostly accurate.  But those being described, most of them white, are the progenitors of the elite’s of San Francisco today.  Pelosi, Brown, Getty and Newsom are just four of their descendants.

Where did you imagine the ‘elites’ came from?  They learned their ethics and humanity from their parents, who had thoroughly demonstrated their values.

It is not the ordinary white population who came up with the idea of enticing Muir to head up the Sierra Club, an earlier generation of the uncouth named handled that; their motivation was to either shut Muir up, or, get him to support obtaining the Hetch Hetchy Valley as a water supply for San Francisco.  Failing that, they needed to control him while this was handled.

When the time came, and they knew it would, Muir needed to trust them.  This worked perfectly, they had been glamping together for years.

The San Francisco Earthquake and Fire takes place on April 18, 1906.  Due to the incompetence of these same elites, the first disaster gains in magnitude because no thought has been expended on preparing for any disaster at all.  The dumb idea of using dynamite to blow up buildings, spreading the fire is carried out with elite hires in charge.

To date, no one knows how many people died of the earthquake, an act of nature; and how many died of elite incompetence.

The first thought in the minds of the elites was not relief for those left without food or housing, but, “Hey!  Now we’ll have the political clout to get the Hetch Hetchy!”

Muir had previously resisted the attempts of Gifford Pinchot, the first head of the Division of Forestry, appointed by President William McKinley, in 1898, to persuade him to the position of Conservationist, meaning, “we keep it until we want to use it, and sooner rather than later.”  Muir would always be a Preservationist, meaning, “We leave it as God made it.  Look and leave.”  There are longer definitions but those will do for now.

Pinchot’s family was in the lumber business.

Note that the Sierra Club began describing Muir as a ‘Conservationist’ as soon as he was safely dead in December 1914, and the campaign to grab Hetch Hetchy barely waited until the fires had burned down in San Francisco.

Muir was galvanized into action.  He lectured, wrote letters, argued, and did all in his power to stop the theft of Hetch Hetchy.

But the elites were ready; the Sierra Club had been founded for this moment in time.

Muir spoke to true believers, the public, and small groups across the country.  One man talking, no major media.  But the decision hinged on the coming election for President.  Woodrow Wilson had promised to give San Francisco the Hetch Hetchy – if he won.

The elites of California delivered the state for Wilson.

My grandfather, Arthur C. Pillsbury, was a Preservationist.  He first met Muir on board the Harrison Expedition in port in late 1899 and took a photo of Muir.  This was published the next year, credit to Pillsbury, in Camera Craft, a journal on photography launched in early 1900.

The two shared a passion for Yosemite and for the flowers.   In 1909 Pillsbury went into rapid action mode and made the first nature movie; he began showing it to groups in Yosemite by 1910.  Pillsbury offered to make copies for Muir to use with his lectures to bring in larger audiences.  But movies were not yet respectable.  William Colby, executive director for the Sierra Club and Muir’s ‘assistant’, thought it unwise to use movies.  He was also unenthusiastic about having Pillsbury’s photos used in Muir’s upcoming book.  Muir held firm on this, however.  Pillsbury’s photos were used for, “The Yosemite.”

A wonderful gift had been arranged for Muir; in honor of the insights and inspiration he had provided.  An anonymous benefactor had arranged a trip for Muir; it was like a dream come true for John Muir.  The Benefactor, who insisted on remaining anonymous, had planned a trip for him first to South America for a journey up the Amazon, and then on to Africa.  These were places he had wanted to see all his life.  And if that did not kill him, well it would be too late to stop them.   Muir was right that the Sierra Club had all well in hand, but he was wrong about their plans.

The elites were salivating over the idea of municipal water and private electric power galore and the money that would flow into their coffers from taxes, power, and water.  And all it took was destroying the Hetch Hetchy Valley, the other Yosemite within the National Park.

Muir took ship in Brooklyn, NY Leaving in August 1911, effectively cutting off all communications on what was happening at home in America.  When Muir stepped off the ship on March 27, 1912, he learned the Hetch Hetchy had been lost.

Muir died in a Los Angeles hospital on December 24, 1914, his heart broken.

Pillsbury had demonstrated the power of film and the elites had experienced the impact.  He was a problem they knew they would have to eliminate.

The effectiveness of film was proved by Pillsbury in 1912 when he showed his newly invented and filmed lapse-time film of wildflowers. From seed to death, the gathered Superintendents of all the National Parks viewed this at their annual conference, that year held in October.  They immediately voted to stop mowing the meadows for fodder for their horses.  Seeing the film persuaded them.

The National Press Club viewed one of Pillsbury’s films in October of 1915.

By 1919 Pillsbury Picture Company nature films had been licensed for global distribution by Pathé, Universal and Paramount.  Motion pictures had proved their power.  In 1926 he was asked to make a presentation to then President Calvin Coolidge and 70 of his closest friends at the Willard Hotel banquet room.

But this article is not about dumping icons; it is about being more discerning about which icons should be dumped, and why.

Today we are divided Left and Right but the squirrely things we are encouraged to argue about are intended to keep us busy fighting each other and ignoring the elites who continue to reduce us further into absolute serfdom.

Therefore, you need to take a hard look at what you think you know and revise your assessments.  Fund’s article artfully evaded the real issue, and that is what you should remember.  Fund always injects more issues to divide; never mentioning the truths which bring us together.  That is his job.  Always note the difference between what people and ‘organizations’ say – and what they do.  It matters.

Posted by Melinda Pillsbury-Foster at 4:46 PM No comments: