NOT RESPONSIBLE FOR ANY DEBTS BUT MY OWN 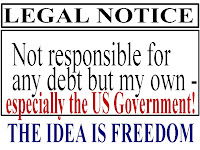 Time for Legal Notice to be served.

When you have someone in your life who has been totally, or even criminally, irresponsible, the usual practice is to write up a small ad and insert it in your paper informing everyone you cannot inform directly that you are not responsible for their debts. It is legally binding. This is your opportunity to let them know you are not having it, for yourself or for your children.

The US government, formally known as the Municipal Corporation of the District of Columbia, has decided to indenture our great-great grandchildren with a debt paid into the coffers of their friends and associates, banks in Europe that have been stealing us blind for generations already. The wrongness of it is so palpable that Congress was inundated with a rage of missives, calls and emails.

The outrage and frustration being felt by nearly all non-comatose Americans is unmeasurable.

The letters being written range from mild to vitriolic. One example said,

“It is unreasonable to vote for the financial services bail out. The alleged crisis has been in an ever accelerated burn for more than a year yet only now do we have an emergency? Please reject nationalizing institutional losses and the continued privatization of profits. I think a better use of our currency would be to provide immediate foreclosure protection and to allow the banks, finance firms and investment bankers, to utterly fail. What are we saving with this bail out anyway? Vote against it.”

Another American, the mother of three, wrote this:

I was watching you do some questioning today regarding the banking MESS. You seem to be very intelligent in your questioning; however, it looks to be an answer of song and dance.

Here is my plan:

Cause of the mess: Banking ripping off homeowners with inflated rates, arms, etc. in addition forced placed insurance policies included in escrows and financed back into loans that ho one is referring to. In addition the taxes all across the country, inflated county taxes, and counties riding off these funds, but escrowed and financed into mortgages. Everything blown up.

Give a boost to the homeowners, have applications sent into a regulatory agency that will use the billions Wall Street is asking for and save all of our homes (with set guidelines), i.e. Months behind in payments, why etc. limits on amounts and negotiate with mortgage firms just like the modification teams that are charging people 3 K or more. Save the people by extending this service to them, thereby the money saved can be well spent in other ways. Then, in this way, the homeowner will use additional funds to boost the banks and business naturally.

Gasoline is killing us all. Small business like mine for example, is dying. I had to layoff everyone in anticipation 1.5 years ago of the high prices. My debt is not being forgiven. Let it go to small business through the S BA and lift regulatory requirements so a business can walk in and apply for a loan. We are struggling to keep our heads above water. You are pushing us under.

The banks have gotten everyone into this mess. CEO's have been raping companies with large salaries, let them fall. Investors knew the risk going into Wall Street. They accepted the risk, let them absorb it now.

The counties will expenditures on silly items, for example 3 men to dig one hole and two to supervise. Fire them. Let them get honest jobs. Stop squandering our money.

Why should I or my children pay taxes to subsidize corporations with no more sense of thrift than kindergärtners?

How much did the CEO of Goldman make before leaving his company? No one is going to forgive my business like that.

Will the government send me a healthy dividend check when these companies start showing a profit again? You know the answer. No one can keep the profit and cancel the debt, not even you.

I hope you and your associates take my comments to heart. I vote, as little as that seems to mean today.”

And another man laid it on the line to Congress. This was served this morning.

Shall the Congress continue to in debt us to a private bank that is failed?

It is not in America’s interests to continuously prop-up, feed, repair and fuel an institution that is self immolating.. It must be allowed to consume itself and the debris removed. The Federal Reserve System collapse can be likened to Chernobyl. It is not repairable and by its nature hazardous to us all.

Thomas Jefferson states it best, "If the American people ever allow private banks to control the issue of their money, first by inflation and then by deflation, the banks and corporations that will grow up around them (around the banks), will deprive the people of their property until their children will wake up homeless on the continent their fathers conquered."

What will Congress do? Does it matter? They have let us know their intentions. We need to protect ourselves now.

The melt down of the mortgage market was carefully planned and orchestrated as a way to pump trillions out of our hands and into the coffers of central banks. Each step in the process was carefully manufactured. They stole our homes and changed the bankruptcy laws to make our serfdom inevitable.

Their plan has been in motion for a very long time.

1913 - The establishment of the Federal Reserve Bank obligating Americans with a currency that profited only a small clique of private bankers while all Americans paid.

1933 - The bankruptcy of the US government, MCDC, which resulted in each individual American being listed as a source of credit on those bank balance sheets through their birth certificate the moment it was filled out.

2008 – Overt Corporatization, “privatization” of America into the direct, obvious control of those same corporations.

Fractional reserve banking is the ultimate license to steal, allowing those same banks to write money into existence with no obligation to themselves. The obligations have all been ours.

It has always been a fraud, on which there is no statute of limitation. They use Congress in attempts to evade accountability. We can not let them get away with it.

Now is the time to notice them and everyone else. If it was your drug-soddened cousin, your irresponsible ex-spouse, your larcenous former business partner you would notice the world; we are noticing the whole world.

This notice will be sent out across the globe. It will tell everyone that we, those signing below, are not responsible and will not pay. Protect yourself and those you love.

We, the Undersigned, hereby notice all that we are not responsible for any debts but those owed to living persons who are not affiliated with corporations working with or benefiting by the unlawful actions of the Municipal Corporation of the District of Columbia.

Your ad will run in the Iconoclast, the news source for freedom. For $20.00 Go Here

And buy the Tee-Shirt. You want everyone to know.

Posted by Melinda Pillsbury-Foster at 10:33 PM

So how do you feel about Mr. Obama's billions spent?
Seems the "neocons" were just the warm-up act for some big time spending by the darling of the left.

This article was written before the election in 08. All politicians are the same, they grab our money. What don't you understand about that?