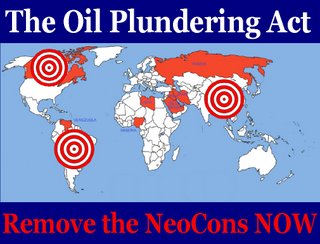 “Mom, when did Congress pass the Oil Plundering Act?”

Arthur surprised me while I was busy at the computer with the above question. I paused. I had been wasting a moment reading the posts on the purported affair between Lew Rockwell, and Cindy Sheehan. Libertarianland is a small world where everyone pretty much knows each other.

“What did you say?” I was sure I had misheard him. When I am reading I have been known to ignore earthquakes, even when it isn't gossip about someone I know. I got to know Lew when we were both on Libertarian National Committee in the 80s.

“The Oil Plundering Act. You said that Lloyd's of London had canceled the insurance for every country that had oil under its borders because of the potential liability.”

The memory returns, oozing back into my mind from a great distance.

The conversation in which this snippet was embedded took place recently over a dinner of Enchiladas Rancheras, one of my specialties. Given the interest this administration has exhibited in Venezuela and Mexico, among other nations, fortunate or unfortunate enough to control large reservoirs of oil, the remark had been not completely intended to be funny.

The remark lead to a longer discussion over the same savory dish as to how Lloyd's of London insures against risk. Private investors guarantee the policy, paying off in the event that becomes necessary. You could certainly see how Lloyd's might decide to end coverage in countries which, for this administration, are sitting there like big, succulent chocolates nestled down in their gold box. Certainly the lusting eye of Big Oil is a risk in the world today and it therefore follows that those factors would have to be accounted for by the Lloyd's actuarial specialists.

This lead to a discussion of the specific nations that therefore might be at risk, a respectable total, and the viewing of the website on where known reserves of oil are located.

That lead to a call to a good friend of mine, a petroleum engineer, who told me that the largest reserves of oil on American soil are those in Alaska.

As we know, these are now shut down due to the condition of the oil pipe line. What I did not know was that for at least the last ten years whistle blowers have been telling everyone in Washington and everywhere else they could think of that the noncorroding chemicals that should have been happily flowing through those pipes, preventing the slip last year of 1,000,000 barrels of oil and the close down this year were never used. One could suppose that the thrift of saving on the cost of the noncorrosive additives seemed like a good idea at the time to those in charge of the pipe line. That was, in care you did not know, British Petroleum.

At this point the pipe has corroded to the thickness of 1/100th of an inch. So maybe it was thrift - but my friend had another explanation.

Back to the insurance issue. BP likely has insurance, probably with Lloyd's of London, that immunized them from loss every day the pipeline is not in operation. So they get paid for ignoring the need to add the noncorrosive chemicals. Perhaps the whistle blowers should have been calling Lloyd's, humm? Perhaps Lloyd's should look at the fine print, hoping that there might be a way out. Perhaps they could consult FEMA.

British Petroleum seems to get some amazing deals from government, especially for a foreign corporation.

British Petroleum, who controls the pipeline in Alaska, was the entity who was to have been given the right to drill for oil in the Alaskan Wildlife Preserve as well. I guess we can hope that this latest fiasco ensures that Congress will see that they are not a good choice. Of course, considering the make up of Congress we can not be sure of that either, can we?

British Petroleum came up just a few moments after these epiphanies when another friend called me and mentioned that they were comparing the solar panels produced by British Petroleum (expensive and inefficient) with another technology (cheap and reliable). Why was I not surprised? After all, for BP to produce an efficient technology would not put money in their pockets.

The whole thing just fit together so perfectly I was amazed.

The Administration allows BP to have a sweetheart deal in Alaska and hands them the right to drill in the Alaskan Wildlife Preserve. BP, showing the same good judgment we have come to expect from all government decides not to use the noncorrosive additives knowing full well they will not lose thereby. Their friends in Washington, look for more oil fields, which will also benefit BP.

I could just see the bulls eyes painted on the world map in the White House. Americans should really make up their minds to target Rove-Bush-Cheney for removal instead. Also, get ready to buy the units that will really minimize the purchase of oil.

My friend is about to start producing units that will eat BP alive. That is a meal America, and the world, needs.

So, after all of those entertaining moments I sat down and wrote this. I told Arthur that Congress did not actually pass a bill called the “Oil Plundering Act.” It just seems like it, given Iraq and the lustful eyes this administration is casting on Syria and Venezuela. But Lloyd's of London should consider canceling those policies or even going into another line of business.

And thanks to Lew and Cindy for light moment. However, we all know that old people don't have sex. What could Melanie Morgan have been thinking?

Posted by Melinda Pillsbury-Foster at 12:23 AM