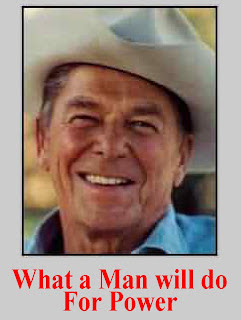 Ronald Reagan was a wonderful, warm man. He made you love him by small acts of kindness and beautiful gestures. Raspberry Gumballs and the President.

But what America needed was the simple truth and a champion for individual rights and the Constitution; That Ronnie did not have to give. Today we need that individual even more desperately. We have that in Congressman Ron Paul.

United Republicans of California ("UROC") was founded on April 22, 1963, by then State Senator Joe Shell (see footnote) and Assemblyman Bruce Reagan to promote the candidacy of Senator Barry Goldwater for President of the United States. Many Republicans were disgusted with the corporate agenda adopted by the Rockefeller, big-money brokers who had controlled the Republican Party for so long. UROC's agenda was a real grass-roots campaign that took the ideas of Barry Goldwater directly into the homes and minds of Americans.

The method they adopted was shoe-leather activism. In San Marino alone, 15 groups of UROC members committed to going door to door for a registration drive that changed the make-up of the Republican Party. They went armed with Goldwater literature, two books: "None Dare Call It Conspiracy" by John Stormer and "A Choice Not An Echo" by Phyllis Schafly, and were prepared to talk about ideas. By this means, something like 2 million copies of “None Dare Call It Treason" were sold or given away by Goldwater activists.

UROC did not spend piles of money to enact change. Their activism, however, successfully changed the demographics of the Republican Party, awakening Americans to the ideas Americans had hungered for and encountered through several difference sources.

One of these sources,“Conscience of a Conservative,” by Barry Goldwater, was published in 1960. At that time, the then-rapidly-growing freedom – conservative movement was also fired with enthusiasm for the works of Ayn Rand and science-fiction master Robert Heinlein as well as the works of Rose Wilder Lane and Isabel Patterson.

Other organizations, such as the LA-based Foundation for Economic Education, established in 1946 by Leonard E. Read, and the John Birch Society, founded by "Taft Republican" Robert Welch in1958, promoted the benefits of free-markets and less government. These organizations continue to promote the same ideas today based on the foundations of freedom outlined in America's Founding documents.

Those ideas found fertile ground in the 60s, evoking a shift that continues today.

The ideas enunciated by UROC stood in stark contrast to the big government – corporate assumptions that had become institutional to American politics. America had undergone a take-over by corporate elites, led by Nelson Rockefeller, not yet recognized as such but the awareness that something was very wrong with America's direction resulted in an exploration of ideas that would eventually lead to the present.

The term Goldwater Republican became a badge of honor. The ideas that became the Conservative mantra defined what it meant to be a Conservative Republican. Those ideas were specific and reasoned. Today, being a Conservative means something entirely different.

The re-structuring of the term "Conservative" was accomplished by the reinterpretation of terms and issues using a carefully-orchestrated collation of faux history, misdirection, and political and personal coercion. Those who were, and are primarily, responsible for carrying this out were the interests, mostly corporate, who employed the NeoConservatives for just this purpose.

Unfortunately, the covert campaign to steal the term, 'conservative,' succeeded in grabbing it and the power of that movement from those in the Republican Party by the time of the Nixon presidency. Nixon was not a conservative but knew well he could not be elected unless he disingenuously assumed that mantle because Republicans had demonstrated a hunger for the rhetoric of freedom.

Ironically, it was Richard Nixon who fractured the Republican Party, driving out the Libertarian wing with his announcement of Wage and Price Controls on August 15, 1971. The Libertarian Party was officially founded on December 11, 1971, by David Nolan and a small group of former Republicans in the living room of activist Luke Zell in Colorado Springs, Colorado.

David Nolan had been an officer of three organizations at MIT which were working for the candidacy of Barry Goldwater. The three separate groups operating at MIT in 1963-64 were Young Republicans, Young Americans for Freedom ("YAF"), and Youth for Goldwater. The officers overlapped, making it possible for them to have more presence on the campus. Nolan came to the ideas on individual freedom, economics, and the Constitution from Barry Goldwater, Robert Heinlein, “The Moon is a Harsh Mistress,” and other fiction, and Ayn Rand's “Fountainhead” and “Atlas Shrugged.”

Soon after this, the first wave of eager and ambitious Trotskyites, soon to re-label themselves as Neo-Conservatives ("NeoCons"), left the Democratic Party to become Republicans. The first of these were Irving Kristol, his wife and son, William Kristol. These were soon followed by the cadre that, at present, still comprises the main intellectual end of the NeoCon cabal.

These idea-mongers had found a flush living re-packaging the strategies of Leo Strauss for use on Republicans and Libertarians. These included posh weekend-seminars that helped them identify potential academics and intellectuals who could accept their ideas with a straight face, keeping a clear eye on the potential for self profit.

Soon, the need to suborn and redirect the nascent Libertarian Movement and Party would be turned over to Edward H. Crane, III, and other profit-minded people.

Just a few years earlier, the same corporate interests had finished their capture of the Conservative Movement through the man who would become their first NeoCon President, Ronald Reagan.

UROC had encountered Ronald Reagan while it was still a shiny new organization still working on registration drives for Barry Goldwater. Ronnie had injected himself into Republican politics by giving the famous speech at the 1964 nominating convention that the corporate interests had been unable to stop directly.

Joe Shell said that during his campaign swings across California in 1962 his plane was sabotaged. It was an observant pilot who noticed, before the second leg of the flight, that the still-full second tank had been laced with barium. That observation saved them both.

According to Connie Ruffley, State Co-Chairman of UROC, Joe Shell had paid to have a speech written for Barry Goldwater who was to deliver it the 1964 Republican Convention. Nancy Reagan called Joe Shell and pleaded with him several times to allow Ronnie to read it. Nancy's tears and pleadings to allow Ronnie to read the speech over-came Joe and he reluctantly allowed Ronnie to deliver it instead of Barry. This speech gave Reagan a position as a Conservative and his courtship with UROC and the Conservative base in California. Joe Shell later remarked to Marion Hurley, State Co-Chairman of UROC, that he would regret to his dying day that he allowed Reagan to deliver that speech.

Ronnie then began to identify himself as a conservative. Until as late as 1960, however, he had been a leading member of United World Federalists (whose purpose was to merge America into a world government) and a charter member of Americans for Democratic Action. In addition to these far-left groups, Ronnie was a member of the National Advisory Council of the American Veterans Committee, which, according to a California Senate Committee report, was "under communist influence."

Reagan's interest in politics was sparked further when he was solicited to take a role by a group of wealthy men in Los Angeles, many with links to the University of Southern California ("USC"). This group provided funding and an infrastructure that allowed them to use The Great Communicator as their front man who sold himself as a 'conservative' using rhetoric that, after Reagan's election to office, was then refuted by their policies and appointments.

The change in what Conservative meant lasted until Reagan had obtained UROC's assistance in becoming governor of California in 1966. UROC, as it had done for Barry Goldwater for President, got behind Ronald Reagan for Governor. After the election of Reagan as Governor, UROC gave Reagan a list of reliable and qualified conservatives who would make outstanding candidates for California department heads, etc.

When Reagan's appointments as Governor began, none of those individuals UROC had recommended were named. His appointments were looked upon, first, as 'inexperienced.' The leadership of UROC spent a year researching and monitoring Reagan and his appointments and uncovered the fact that all of those named had been dedicated to vote for Nelson Rockefeller at the 1964 Republican National Convention.

It was a bad day for freedom, individual rights, and the U.S. Constitution. The Reagan Governorship in California left real Conservatives in shock, creating the raw material for injecting the NeoConservativism that would soon follow.

In 1963, UROC issued statement of principles which they stand by today. These principles define the operating principles of the larger Freedom Movement.

On May, 19, 2007, UROC endorsed Ron Paul for President because Dr. Paul's principles mirror those of UROC. Real Conservativism, Libertarianism and the U.S. Constitution have a champion. Americans hear Ron Paul and find new hope in a man who has lived his principles instead of speaking the emptiness of unfulfilled rhetoric.

Footnote: Joseph Shell had been the Republican gubernatorial candidate for the Republican nomination in California in 1962 who lost to the Rockefeller forces. Shell believed he had been lucky to escape with his life. He told me about this over lunch while I was working on the White Campaign for 20th State Senate in 1990.

Joe said that during his campaign swings across the state before the primary his plane was sabotaged. It was an observant pilot who noticed, before the send leg of the flight, that the still-full second tank had been laced with barium. That observation saved them both.

Posted by Melinda Pillsbury-Foster at 2:11 AM

What is your source for the story about Joe Shell's plane being sabotaged?

Joe Shell told me the story while we were at lunch at the Airtel in Van Nuys in 1992. I was working on the campaign of Dolores White, then running for 20th State Senate, as campaign manager. My Uncle Charles Reasoner had worked on Joe's campaign and we were talking about his campaign in 1962, my Uncle, and Richard Nixon's motives for a run he knew could not win.

Joe told me this story himself also when I worked for the CA State Senate in the 1990's. Lindahtlygov

Thank you for this and other important posts, especially about the neocons. Can you lead me to sources that provide more info on Reagan being a "a leading member of United World Federalists"? I know he admitted to having some liberal views in his early career and knew he joined the group, but never found details.

I doubt Ronnie had any views except it was better to go into politics than be an unemployed actor. From what I know the decision to cooperate with his sponsoring group, and they were corporatists, was entirely monetary.