Kevin Martin: Trolls of the Bush Administration – Making money by chopping you up for sale. 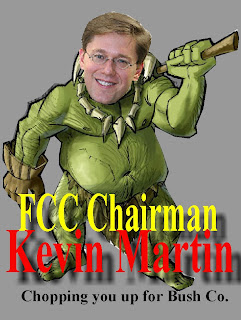 Kevin Martin is a name you should get to know. He looks harmless, even as a troll. But he isn't. He is going to cost you huge chunks of money and significant portions of your freedom. Kevin Martin is the Bush Troll presently overseeing the sale of stolen property at the Federal Communications Commission

Perhaps you are too young to remember when television was broadcast and came into your television through rabbit ears or an outdoor antenna and came only over the "FREE"airways. Starting in the 50s you received programs on the set you bought and placed prominently in the living room. After all, you wanted people to know you could afford it. Programming was innovative; television ads were blatant but you wanted those, too, because programming did not last that many hours a day.

Costs: The Set (It probably sat in a glossy wooden box. It might even coordinate with your furniture. Sort of.) and the electric power. Everyone knew that the airways belonged to the people, held in trust by the Federal Communications Commission.

How things have changed. And how they are going to change. You can't even begin too imagine what's on the horizon.

That television your parents bought in the 50s is more sophisticated today. It is also more expensive and probably connects to programming via a cable service for which you pay amounts of money ranging from around $40.00 a month up into a couple of hundred. This will vary, depending on what extras you decide you can't do without. You see government is backing cable television operators who generate revenue for their services, which in turn generates tax for the treasury, and which tracks customers and their choices and usage patterns so they can essentially use big corporate entities to spy on us. They can't do that over the free airways.

Some of you may be asking yourself why you can't just climb up on the roof and put up an antenna? Of course, you may live in one of those new postage stamp housing developments that do not allow anything so completely déclassé... called "Restrictive Covenants" That story belongs in another article. See Keeping Your Home. But getting the cable turned on today is just like getting the electricity and water. Now, that should give you pause. Look for other stories on the Bush Trolls, coming soon.

Television started as analog. In 2010 you, and all of us, will be forced to move over to digital technology. The premise under which this is taking place is solemn opinings on the quality and efficiency of digital over analog. That is true. But that does not translate into the transferral of this God-given resource into the dirty, grasping, sweaty hands of quasi-government corporations who are conspiring to charge us for what we already own, and was once free, paid for by advertising. They call this privatization but that is government speak for we are stealing your right to free broadcast television. It's a lie, just like the war in Iraq was a lie.

To privatize would be to bring or give something back into the control of ordinary individuals. Conversely, this is corporatization masquerading as something that was once respectable. If you reconsider the word, "privatization,' you will see this redefinition has been going on for a long time. This interpretation is more pirate the private.

Here is their business model: Subscribe to what should be free so the Grid Corporations can make trillions. The Bushes will doubtless get a percentage. They call this blood money. We should all band together, and hold any Senator of Congressman who supports this behavior and remove them from office. Specifically target them for removal and then hold them fully and legally liable and accountable.

You are being urged to buy, buy, buy the new technologies and so fatten the corporations and generate more taxes. These products sound sexy, appealing and exciting and are only transitional in nature until the next "new and improved" version comes out three weeks later. This will be a whole new infrastructure. High definition, plasma, wireless, interlaced, non-interlaced, 1080I, 1080P, and the myriad of gadgets to go with them. You pay and then you will never stop paying. Because if you don't pay to subscribe you won't see anything on your new $5000.00 TV!


Today significant amounts of the content come cost free to those who provide the programming you pay for. Much of that comes from your tax dollars – but they still insert advertising, giving them yet another profit center.

No one invented the air ways. They exist not through any human agency but, like us, through the complex nature of the universe. The idea writing law, The Communications Act of 1934, passed by Congress, was to regulate the use of this resource and ensure it was forever guaranteed for the use of the people. Today the airways are being auctioned off and someone, not you or me, rest assured, is making an enormous profit and creating the means for ensuring a perpetual stream of income. We don't get any of that, either.

The development of the technology that is being applied to make the airways usable was, in part, developed privately. Gugliellmo Marconi changed the world we live in at 12:30 pm December 12th 1901. The message was in Morse code click – click click or 'S.' The transmission was picked up by Marconi and George Kemp at a receiver station at signal hill on the Newfoundland coast.

The original analogue technology would be in large part privately funded. But the digital technology that is replacing it came from tax dollars. We own it and it is far better.

Analogue is a light bulb. Digital is a laser pointer. Analogue causes interference and feed back. It catches harmonics and wanders into other channels. Digital is pure, crisp and right on the money. In the worst case you can get ten times the number of channels with digital. But in the best case you get 100. It is worth trillions of dollars in potential income if you can pull off the transfer of wealth, taking what belongs to all of us and selling it for a few shekels to the hungry maw of greedy grid corporations. The Bush people can only sell it as long as they control the government so that has to happen now.

That answers the question of why is this administration is working so fast to sell a resource that belongs to all of us. Remember those pallets of money that disappeared on their way to Iraq? Remember Silverado and Neal Bush? This is how the Bush family makes a living. But they can't do all the stealing themselves; too much like work. So they get trolls like Kevin to do it for them.

They are setting us up, forcing us to subscribe to what is free. They are licensing their buddies to impose a business model to make trillions. The Bushes have doubtless ensured they will get a percentage. It should amaze all of us that Congress has still failed to impeach. Impeachment is the cure for lying in office. Because of this dereliction Congress also must be targeted for removal and then for accountability. Check out those in Congress, too. Any Senator of Congressman who supports this must be removed from office. Their actions lead the reasonable to the conclusion that they, too, expect to profit.

Take another look at Chairman Troll Martin. Now that you understand what he is really doing he doesn't look so harmless, does he?

We can remove them all. We can take our country back. We can assert accountability. Then The Gang of Trolls and Bush can get jobs at MacDonald's. Jail is too good for them.

Posted by Melinda Pillsbury-Foster at 4:44 PM