The Tipping Point – Taking Back America 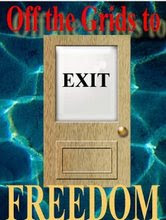 (See the Ron Paul Ad in the Ames Tribute placed by supporters.)

On this day, August 8, 2007, America is at a tipping point. We arrived here through a series of incidents and actions, many unintended.. Our tools for creating the world we know were law and institutions, tools we thought would provide stability and order. Instead we have violence and growing fear.

Growing numbers of Americans now realize that those we trusted have used those tools to enrich themselves. The shock of understanding vies with an overarching sense of outrage. We are faced with the compelling need to change government because of the deceit and unbridled greed of those who used our trust to steal.

Greed is a long-understood human failing. Our institutions were used to deceive us. Those deceptions were created by people we trusted who stood to profit. We know their names and it is a long list including former presidents, the heads of corporations, and leaders from both major parties. This did not happen as a single conspiracy; it happened because when one person comes up with an original way to steal, it will be copied and applied to other circumstances to achieve the same purpose.

As John Judge says a conspiracy means to breath together. These people have bad breath and ambition combined with habits of larceny.

A blow dryer is a small appliance used to dry and style your hair. Dropped into the bathtub of someone you want to eliminate, it is a murder weapon.

Blow-dryers and institutions of all kinds are just tools. These 'leaders' and other individuals entrusted with American's tools are responsible for how those tools were misused. There are many tools we need to rethink. We have been too trusting.

Our monetary system was intended to provide the means for exchange, to securely hold money, and to provide a way to measure what money is worth. It has become a weapon in the war to steal the wealth of people around the world. Fractional banking is a monopoly license to print money, issued by Congress to the Federal Reserve System in 1913. This system has stolen the wealth of five generations, while reorganizing us to make stealing ever easier.

We have learned that the greed inclined who work their way into power always want more of our wealth and lives. Politicians make a living making sure that Grid Corporations, for instance all the oil companies, Halliburton, Koch Industries, and scores of others keep us passive and paying.

Other Grid Corporations did this with electricity, transportation, for all financial dealings, for insurance, and for all government services including the police and military.

In cooperation with government and aided by the media they have been re-calibrating the police and military to control us when deceit finally fails, which it is now doing. The cows, us, have to stay in the pen.

How they accomplished this redistribution of wealth is an ugly story. It will get uglier.

Those in government, profitably employed by Grid Corporations, knew that we would eventually notice. Like a conman playing the old pea and shell game they used lots to distract us.

In the wake of WWII they terrorized us with the boogie man of Communism; When it seemed we would agree on the need for clean air and water the same corporations used operatives to take over the Environmental Movement, displacing the real Earth Day for the April Oil Day. Flags flew, rhetoric oozed, children were told to hide under their desks in the 50s. Today they are training our children to expect death at their schools at any moment.

During Iran – Contra Big Oil began overtly dictating when and where Americans would go to war. Our military slid a little further towards being just a tool for corporate profits. But America's servicemen and women were faithful to what they believed. They believed they were protecting our country.

Behind the facade of greed those responsible know they are lying. That truth seeps past their empty words.

To put off the day of reckoning they found justifications for their actions. We know those justifications by many names. Among them are Communism, Socialism, The True Faith (fill in your favorite), The Free Market, Spreading Democracy, Fighting Terrorism, Straussianism, Progressivism - the list is endless. Some of these are complex sets of ideas that seem logical or idealistic - when reality is ignored. By artfully redefining words like 'is' and 'privatize', those in control can justify anything.

Just slather on lots of rhetoric that evokes emotions but is completely disconnected from what the words mean and you hold those streams of income firmly in place. That is government as it exists today.

We are divided. That was their plan. Using rhetoric and the media they sowed poison and distrust. Many among us are coming to realize that Right and Left are meaningless. That is a long step forward. We need to take more steps in the same direction. Women and men, Black, White, Hispanic, (fill in the blank) straight, gay, young, old; it is the contents of character that really matter.

There are solutions to all the problems; we can find those answers.

Get ready to rethink your ideas, rejecting their games.

Government is just a contractor hired to fix our collective toilet. Government cannot be sovereign: the only sovereignty exists in individuals. As the Declaration says,

“We hold these truths to be self-evident, that all men are created equal, that they are endowed by their Creator with certain unalienable Rights, that among these are Life, Liberty and the pursuit of Happiness. That to secure these rights, Governments are instituted among Men, deriving their just powers from the consent of the governed, -----”

This form of government has not worked.

So here we are today. Now the question is what to do about it.

Government needs to be returned to its original form, with the people deciding how to organize at the most local level. That mandate from the Declaration reads:

“That whenever any Form of Government becomes destructive of these ends, it is the Right of the People to alter or to abolish it, and to institute new Government, laying its foundation on such principles and organizing its powers in such form, as to them shall seem most likely to effect their Safety and Happiness.”

This time we'll do a better job. If the last 200 years was the beta test, it is time to learn from our mistakes and hit the Reboot.

To Reboot, we need to get off the grids they set up to contain and control us; we must focus on local sources for all our needs; we need to strengthen community; we must assert accountability through common law courts since their courts exist just to perpetuate their power.

Freedom: You don't have it until you give it away to everyone.

Posted by Melinda Pillsbury-Foster at 2:46 PM

On this day at least, I find myself encouraged by your grasp of what is going on, and that you don't seem overwhelmed by it. I think that as more and more of us wake up and begin to prepare for the collapse of what has been and seek solace and understanding and safety with each other, new behaviors will arise that feel good and will be self-reinforcing. In the sixties, there was a groundswell of energy, a shared vision of what could be. It was not difficult to reach people. We were all reaching out for each other. We rode a wave of discontent, we didn't have to invent or manufacture it.
I think something like that is about to happen again. It will take adversity, just as it took the war and the draft in the 60's. It will take a financial collapse, or peak oil, or disaster or martial law, or some such heavy-duty thing that can't be ignored. And then, we will find ourselves standing up for new visions of what should be: health, not based on the pharmaceutical industry, wealth not based on money, friendship not based on status, desire not based on advertising, respect not based on hierarchy. We all know in our hearts how sick and wrong this culture has become. And we all have our own dream of making some part of it better. A new wind will blow again, and our hearts will fill with it, and we will be moved to action. Each little step that you take now, will lead to a bigger step later on.
I have been on this path for awhile. I am finding peace and purpose and happiness on it. Walk with me. Just being on the path is enough for now.